One of the fastest-growing airports in the United States, Seattle-Tacoma International Airport (SEA) served over 50 million passengers in 2019. 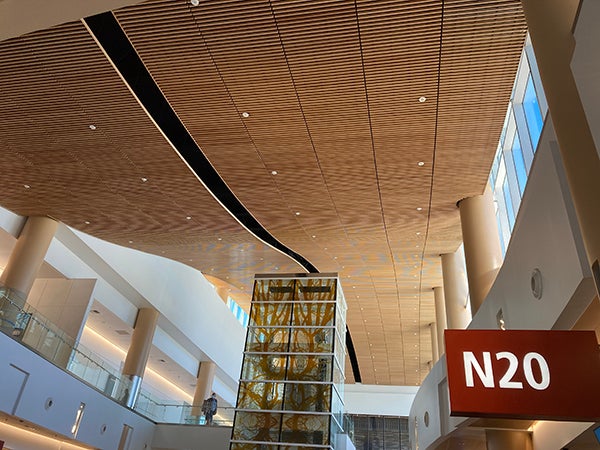 In 2017, the airport began an expansion of the 47-year-old North Satellite, a busy hub located three minutes by tram from the main terminal. The North Satellite (NSAT) Modernization Project combines leading-edge engineering with natural motifs to create a high-tech space with a biophilic design — one that appeals to people’s innate love of nature. “We wanted to bring light into a larger open space as a sense of place for the Pacific Northwest,” says Ken Warren, NSAT Project Manager for the Port of Seattle. “The exterior design evokes a river flowing through the facility.”

The modernization project is doubling the square footage of the North Satellite with 100,000 square foot of new construction tied into a 100,000 square foot refurbishment of the original building. Phase 1 added 10 new gates, and Phase 2 is renovation of the old facility. Phase 2 of the project encapsulates the 1973 structure with new construction in a “seismic hug” that will maintain building integrity in case of an earthquake. Keeping the original columns and major structural beams saves time and money, while the new construction securely braces the old and brings the whole facility up to modern codes.

Hermanson, one of the Pacific Northwest’s largest mechanical contractors offering HVAC, plumbing, engineering, tenant improvements, service, TAB, and commissioning across Washington and Oregon, has been with the project from the beginning.