Winter storms across the country this year have caused more than downed trees and icy roads, they have also seriously impacted the nation’s emergency blood supply.

When inclement weather hits, it is difficult for the American Red Cross to hold the blood drives that ensure the availability of a consistent level of lifesaving blood products. 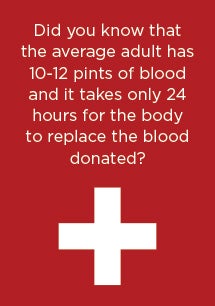 This week, the Hermanson Company’s Wellness Team once again organized a blood drive that collected 20 pints of blood that will go toward saving up to 60 lives! Hermanson Project Executive and first-time donor, Chris Baldwin, found the process very easy and said, “Taking a little time out of my day, could make a huge difference for someone.”

Early in March, Hermanson employees signed up to give blood at a bloodmobile to be conveniently located in the company’s parking lot. On the day of the blood drive, blood donating heroes were preparing by drinking water to stay hydrated and completing their qualification pre-screening Rapid Pass before heading off to their appointments.

After a quick check of vitals (blood pressure, heart rate and temperature), a unique barcode is assigned to each blood donor who spends an average of 7 minutes donating a pint of blood and several vials for testing. The blood is then placed into a temperature-controlled transport container for delivery to a Red Cross component laboratory where the whole blood will be separated into red blood cells, platelets, and plasma and quarantined. Simultaneously, donor testing vials are sent to one of nine testing labs and tested for transmissible diseases. Once the quarantined blood has been released for distribution, the American Red Cross makes it available to hospitals 24 hours a day, 365 days a year.

Stored blood donations are only viable for up to six months which adds to the urgency of collecting an adequate reserve supply. According to the American Red Cross “under normal circumstances, every two seconds someone in America will need a blood transfusion.”

Hermanson will be holding another blood drive in November and if you are interested in donating blood you can find a blood drive near you by going to the American Red Cross website.